Unconscious Speaking Habits May Be Holding You Back

Are you aware of what you do with your hands, or if you use many filler words (like, um, you know) when communicating? And that these unconscious speaking habits may be holding you back?

Most people aren’t that aware – and this is often a good thing! We have enough to do to get through each day without finding something else to work on, let’s face it.

And a few filler works like ‘um’ aren’t an issue. (The problem comes when they multiply and become a barrier for the listener.)

Likewise with gesturing. We gesture to help us think, and it’s important not to inhibit that process. 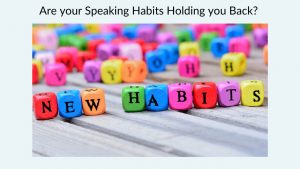 However, where our habits do become important is when the stakes are higher: a presentation we want to nail, an important conversation.

That’s when anything we do “on stage” – and by that I mean 1:1 when it matters, just as much as in front of a group – can make or break the encounter.

And here, it may be important to reframe being “on stage.” It isn’t just when we’re literally speaking of in front of a large audience but any interaction that matters: one where we’re seeking a specific outcome.

And the fact is that any habit that’s not conscious will potentially make you look either:

Two of my own habits used to be:

I still focus on these, to keep my awareness high. It’s easy for distracting habits to get in the way without us even realising. ‘So’ is such a common one, and can creep in anywhere…from introducing a slide to introducing a new thought.

And it’s really a word of summation, not expansion: ‘so’ we definitely don’t want it to take over!

Sometimes we might expect, or rely on, other people to tell us and get feedback that way. That usually doesn’t happen.

And the higher up in an organisation people get, the less likely it is that people will give them honest feedback on how they’re communicating. It’s not usually seen as a good career move!

And if people don’t tell us: then we need to be vigilant: to focus, to regularly watch videos of ourselves or listen – for example – to ourselves as a podcast guest.

If  we don’t pay attention, we’re probably not being as effective or impactful as we can be.

“So” – it’s worth considering if unconscious speaking habits may be holding you back. These are skills, and there’s no need for them to get in your way. With some awareness, techniques and practice, you can make real improvements in how you speak in public or present.

And if you’re in Melbourne and would like to work on your skills, no matter what level you are, I have Level 1 Complete Presentation Skills and Level 2 Speakers Confluence® courses restarting in a couple of weeks.

Be Succinct: Public Speaking without the Clutter

public speaking: be succinct Is your talk too ‘cluttered’ for your audience... read more

Creating a New Speech: 7 Tips To Get You Started

Do you have to write your own speeches or talks? Ever... read more

7 Ways NOT to Open your Presentation

The opening of your talk is crucial: your main goal is... read more

Where's your locus of control around public speaking? Control: where do... read more

Need to motivate yourself? What’s better, self-esteem or self-compassion?

Trying to rev yourself up to improve your speaking skills? There... read more

How to Increase your Self-confidence in Public Speaking (and Life)

Imagine that you're looking for advice on how to increase your... read more

Fear, and How to Build Belief around your Public Speaking

Building Belief I was talking with a client this week about her... read more

Practising your Speech: your Most FAQ

Practising - your FAQ As a professionally trained pianist, practice has been... read more

Unconscious Speaking Habits May Be Holding You Back

Communication Challenge: Talking Too Much When Trying to Convince

Communication Challenge: Not Fully Trusting Your Own Ideas

Is Self-Belief Essential At The Start?

This website uses cookies to improve your experience while you navigate through the website. Out of these cookies, the cookies that are categorized as necessary are stored on your browser as they are essential for the working of basic functionalities of the website. We also use third-party cookies that help us analyze and understand how you use this website. These cookies will be stored in your browser only with your consent. You also have the option to opt-out of these cookies. But opting out of some of these cookies may have an effect on your browsing experience.
Necessary Always Enabled
Necessary cookies are absolutely essential for the website to function properly. This category only includes cookies that ensures basic functionalities and security features of the website. These cookies do not store any personal information.
Non-necessary
Any cookies that may not be particularly necessary for the website to function and is used specifically to collect user personal data via analytics, ads, other embedded contents are termed as non-necessary cookies. It is mandatory to procure user consent prior to running these cookies on your website.
SAVE & ACCEPT
X